Angular expansion joints in general
Angular expansion joints offer a wide range of options, and when built into two or three pinned pipe systems, they can accommodate very large movements with very low reaction forces, without the need for fix points and structures. As angular expansion joints are fully restrained, they require only inexpensive guides or intermediate guides. This gives an economic advantage in large diameter, hot piping systems, even if the movements are complex and in several planes. Further, the hinges or gimbal can be designed to support the dead weight loads from the adjacent pipes and connected equipment, and to carry wind loads, snow loads, and any other external loads from the pipe system, minimizing the need for fix points and structures.

The hinge can also be designed to eliminate torsion forces acting on the bellow. The bellow does not allow any torsion, and this should be counteracted against in all cases. When the angular expansion joints are installed in two hinged or three hinged systems, the distance/intermediate pipe between each unit should be as large as possible, as this allow maximum lateral deflection or movement to be absorbed. If the thermal growth of the intermediate pipe is significant, a three hinged system is required. 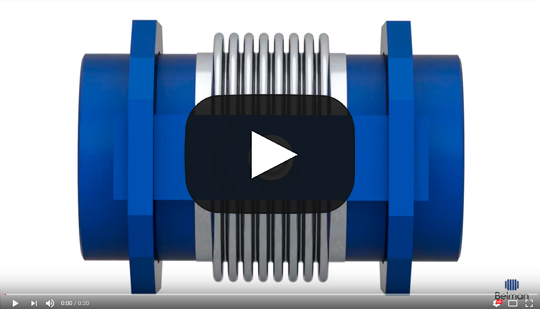 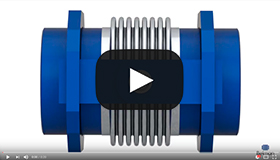 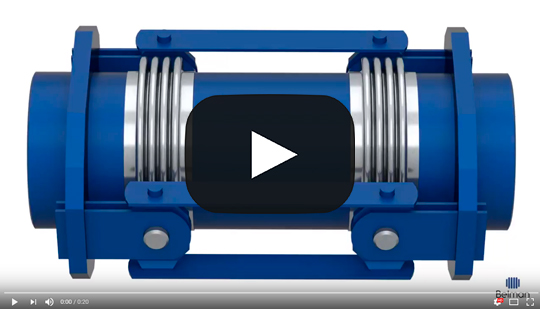 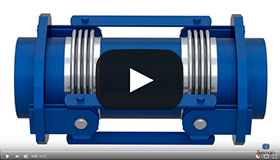 Angular movement
Angular movement is an angular/rotational displacement of the expansion joint where its longitudinal axis is displaced as an arc from its initial position. This is to be understood as an angulation of the expansion joints two end planes relative to each other, which results in the longitudinal centerline becoming an arc, like a pipe bend. The convolutions are uniformly compressed along the inside of the bellows longitudinal centerline, and uniformly elongated along the outer radius of the arc. Torsion or twisting of one end with respect to the other end about its longitudinal axis, and is not to be understood as angular rotation.

Definitions
Angular movement is shown as AN and stated in degrees. Angular rotation is indicated as negative (-) and positive (+) respectively.

Example
Angular movement positive +5 and negative -10 will be stated as: AN +5/-10°. An equal angular rotation over the bellows longitudinal centerline are stated as AN +/-10° (2αN).

What are the advantages of using Angular expansion joints?

What are the requirements for using Angular expansion joints?

Hinges in a system

Two gimbals in a three-dimensional system

Virtual demonstration of
Angular Expansion Joints (Gimbal)
PREPARE TO BE AMAZED!
Discover in detail one of our Angular expansion joints (Gimbal). View it in 3D and navigate around it to examine it’s features. All you need is a tablet or smart phone, then simply follow the instructions contained in the PDF file.
Download

Virtual demonstration of
Angular Expansion Joints (Gimbal)
PREPARE TO BE AMAZED!
Discover in detail one of our Angular expansion joints (Gimbal). View it in 3D and navigate around it to examine it’s features. All you need is a tablet or smart phone, then simply follow the instructions contained in the PDF file.
Download