The lateral expansion joints are available with one or two bellows (universal type) as well as with a number of end connections like welding ends, flanges and/or a combination thereof. Additionally, it can be equipped with accessories like: inner sleeves, covers,
intermediate pipe and tie rods.

The type of expansion joint selected depends on both its cost effectiveness and its suitability for the function to be fulfilled. The economic consideration should not only take into account the cost of the expansion joints, but also the required fix points, guides and structures. 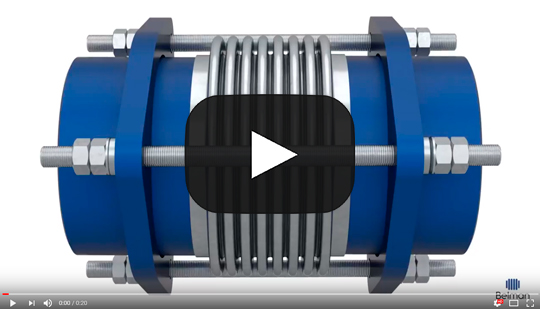 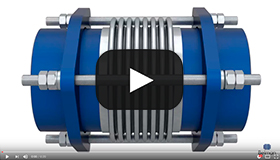 Lateral movement is shown as LA and stated in mm. The parallel displacement is indicated as
negative (-) and positive (+).

Lateral expansion joints can be used as tank settlement bellows, vibration absorbers and in all pipe systems with bends or a change in the pipe direction.

What are the advantages of using Lateral expansion joints?

What are the requirements for Lateral expansion joints?

The configuration is an alternative arrangement in which the expansion joint is installed in the short piping leg and the principal expansion is absorbed as lateral deflection.
The longer piping leg is free of compressive pressure loading and requires only fix points and a guide (Gn).

A piping configuration that permits the use of adapted tie rods to prevent axial movement frequently simplifies and reduces the cost of the installation.
Due to the tie rods, the expansion joint is incapable of absorbing any axial movement other than its own thermal expansion. The thermal expansion of the piping in the shorter leg is, as
a result, imposed as deflection on the longer piping leg. Where the longer piping leg is not sufficiently flexible and where the dimension of the shorter leg is suitable, tie rods may be installed spanning the entire short leg so that no deflection is imposed on the longer run from its source.